And compared to their embedded customers, Apple was just not big business for Motorola.

The G4 had more use in the networking and industrial sectors than it did in Apple, and Motorola didn't want to invest themselves in making updates to their chip that only one customer needed. Motorola was being conservative, which is what they do best. By '97 development had shifted to a third major chip, which Apple called the G3. At this point IBM went back to their own chips and Motorola, left alone to create a new core for Apple, simply updated the G3 with AltiVec and a better complex math unit to create the G4.

In other words, Motorola has been stretching the same technology for over ten years. But what about IBM? Isn't this the same company who created the PowerPC architecture to begin with? Don't they have technology that AMD and Intel covet? They were the proactive force behind PowerPC in the Nineties, so what happened to them and their program with Apple? Unfortunately, this question is a little more difficult to answer than Motorola's, and it has a lot to do with IBM as an innovator.

It starts back in '99 with Nintendo's request to create a small, cool, fast chip to run its next-generation game system with.


Smelling success, IBM started focusing on the highly-specialized embedded applications and courted other console makers. IBM had finally realized its niche in consoles after failing to achieve this in the workstation marketplace for years. Figure 3 PowerPC G5 vs. Microsoft insisted on a PowerPC G5-like chip with high bandwidth and multiple cores.

Spread between its own chip needs as well as Apple's, Nintendo's, Sony's, and Microsoft's, engineering resources were run thin. And guess who was the first to feel it? Apple, that's who, with its measly million or so G5s per quarter. It's easy to see how Microsoft's Xenon project sabotaged Apple's G5 when you stack the numbers up. At best, the G5 ran at 2. Had IBM not been pressed away from the G5, we might see it running at 3.

After looking at Motorola and IBM and their chip businesses, it becomes clear that Apple was a victim of apathy, and that Apple really needed a chip company whose business was desktops, portables, workstations, and servers — not routers or mainframes or game consoles. These criteria basically left one choice for Apple, and there was no one to dissuade them this time.

Apple announced their switch to Intel processors in June '05 and just recently announced and released their first such systems to wide acclaim. The rest, as they say, will be history. With their own development tools, and Tiger presenting a mature, stable API, the cross-grade to Intel chips is almost seamless.

And Apple will never again find itself embarrassingly behind its rivals for clock-speed, or number of cores, or any other feature that becomes important to CPUs. It's obvious Apple wants to complete the move as quickly as possible and get on with things, which is why they're six months ahead of the Intel schedule.


When all is said and done, Apple knows one thing for sure: The sooner forgotten PowerPC is, the better. Thank you for this article. It was extremely informative and very well written. IMHO, G4 was one of the best things in the history of personal computing I still have a MHz G4 Quicksilver and it is a magnificent beast.

As it stands, it's PowerPC for me all the way. I will never go back to Intel. I am a proud owner of a dual 1.

I love this thing and am sad that it is no longer supported. Such is technology, but newer is not always better. All these years later I am still upset at Motorola and their abandoning of Apple. I'm still rockin' a powerbook G4 1. MacWorld also published a review with real-world performance tests that you may wish to read as well. The other single processor model -- the Power Macintosh G5 1. Using the Linpack Benchmark, the "Quad" model produced Some claimed that Apple's benchmark testing was rigged, but the Power Macintosh G5 systems trounced the comparative Windows PCs in a series of real world application tests as well.

Not surprisingly, given that Apple decided to transition to an Intel-based architecture prior to their introduction, the company did not release benchmarks that show the "Late " Power Mac G5 models -- the Power Macintosh G5 Dual Core 2. For complete disclaimer and copyright information please read and understand the Terms of Use and the Privacy Policy before using EveryMac. 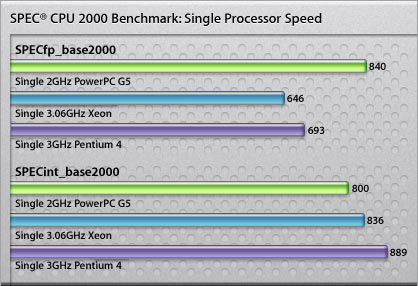